The Indian community and its well-wishers get together on a variety of platforms to mark India’s Independence Day. By the looks of it, there are more celebrations by the diaspora here than by the citizens in India. Whereas in India, the day is a national holiday with the highlight being the Prime Minister’s speech at the Red Fort in Delhi, in Australia, particularly Sydney, the celebrations start early as the various associations vie to endorse their brand of patriotism in their own way. In the recent past, even Local Councils have got in the fray. 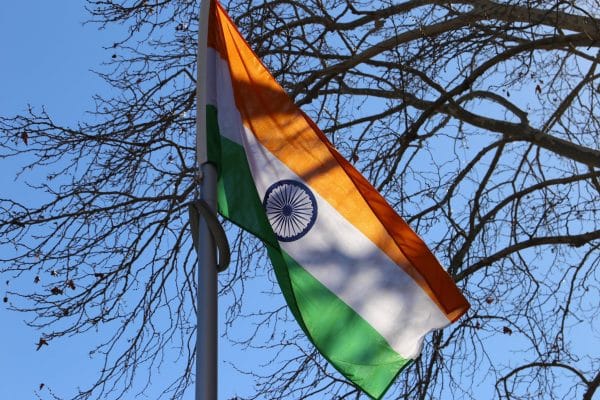 Leading from the front this year was the Mateship Fair by the United Indian Associations (UIA), held on the banks of the Parramatta River. It led from the front solely because it was the first in a long series of similar events – not, mind you, because of any claims to quality. Strangely lacklustre, it seemed like a tick-the-box kind of show, sadly. Not sure what the box was about, either – with no real mateship on display in terms of the features included. The only mateship with mainstream Australia was with a bunch of Brazilian dancers in their Samba costumes, who for some inexplicable reason, won the honour of leading the annual parade this year. The stage with invited special guests outnumbered the people sitting in the audience. UIA needs to get past its desire to felicitate and honour members of the community at all their gatherings: rather have a systematic and transparent method as to nominations and selections of awardees.

The crowds looked to be down from last year. A large number of those attending were cultural show participants and their families and well-wishers. As the options for the free community melas/fairs increase, consumers will become selective of where they want to go. Unless the organisers can come up with exciting options to entice the crowds, sadly these fairs will have declining numbers. 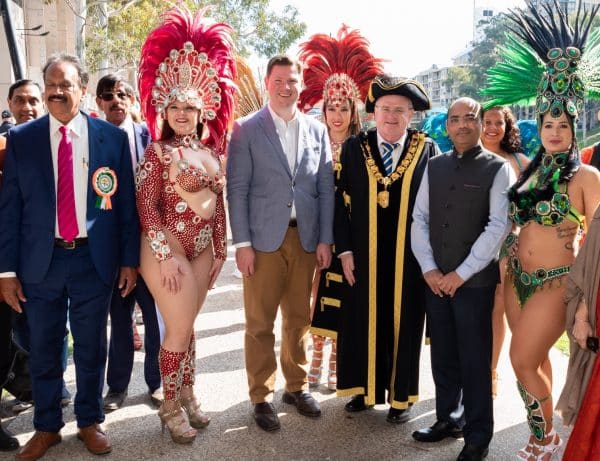 The summary above may well be repeated for the Federation of Indian Associations of NSW (FIAN) event held on 10 August. There were no Brazilian dancers to be seen – which was probably a good idea as it turned out to be one of the coldest days of the year in Sydney. Yet even the icy winds causing the temperatures to plummet could not put down the spirit of the indomitable Yadu Singh, President of FIAN, who declared, “Think about the soldiers who have to endure this cold weather in the mountains of the Himalayas: we need to acknowledge their sacrifices.” Some politicians from both sides of the Parliament abandoned their traditional Indian wear on this occasion, choosing to be warmly clad in their heavy jackets and overcoats, although the odd sari was visible (we’re looking at you, Jodi McKay). Footfall was well down – communitywallahs preferring their hot chai in their blankets at home rather than out in the cold. 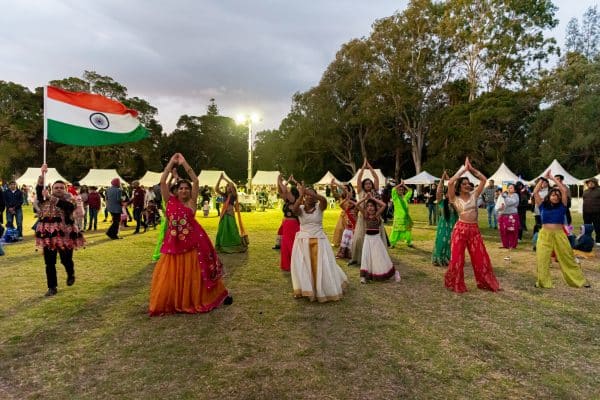 It seems that the Council of Indian Australians (CIA) had the best idea of all. Rather than the grounds of Parramatta, they chose to celebrate India’s 73rd Indian Independence Day with a sit-down dinner at the Pioneer Theatre in Castle Hill, all warm and cosy. With just over 270 guests, the evening was immaculately organised and executed. The team behind CIA, led by President Nitin Shukla, ensured fun and bonhomie for all those in attendance. Being a costed event as compared to the free melas, there was access to funds, which allowed the organisers more flexibility with their programming. Setting the tempo were the wonderful dance performances by the Swastik Dance Group. A blend of traditional and Bollywood dances, the fusion performances were delightful and even set the mood for a few of the invited special guests such as the Consul General of India Manish Gupta and wife Nimisha, NSW Labor leader Jodi McKay, her colleague Julia Finn, Shadow Federal Minister Michelle Rowland, Parramatta Councillor Sameer Pandey and others to put their dance moves on display. There were more than a few talented dancers on stage – and some that should perhaps hang on to their day jobs.

What was lacking that evening though, was a greater flavour of things patriotic that CIA has been known for in the past. 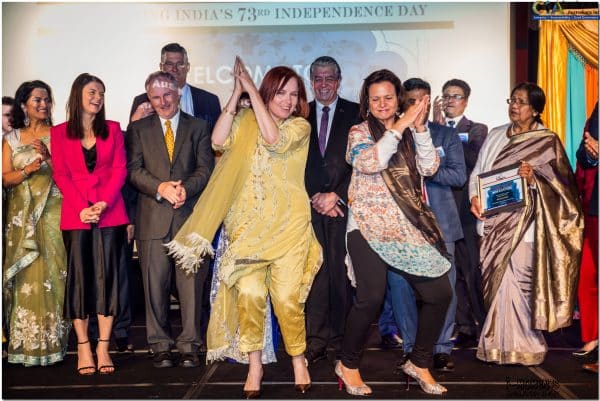 15 August is a day on which the Indian government celebrates the birthday of modern India. At every Indian mission and consulate, the morning celebrations include the unfurling of the Indian tricolour and a reading of the message of the President of India. In Sydney, over 250 people gathered to hear the new Consul General Manish Gupta do the honours for the first time. Yet like very time, the celebrations were solemn and dignified as the occasion and the venue, suitably bringing out the ‘Indian’ in us, many thousands of kilometres away from India. With Mahatma Gandhi looking on in the background at his non-resident countrymen, many photos were clicked and the community mingled with the representatives from the Government of India. Miniature Indian flags were distributed and traditional South Indian breakfast served as the sounds and smells transported us all back to India. 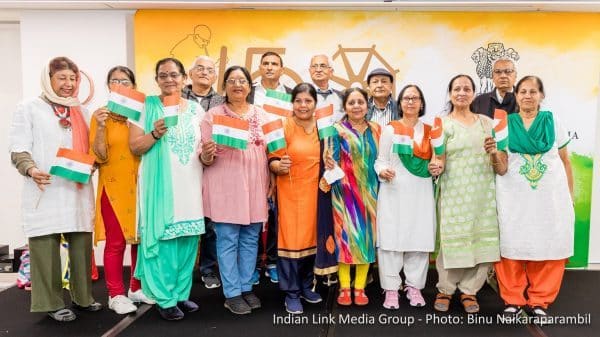 The Indian tricolour was hoisted yet again immediately after, this time a few kilometres away from the Consulate offices. At an event hosted by the City of Parramatta, Lord Mayor Andrew Wilson welcomed the Indian community in his locality to acknowledge their national day. In what turned out to be a bright and sunny week day morning, some 600 people rocked up for the outdoor ceremony to feel the call of the motherland. What they got, though, was something much more – they gained a broader, more inclusive sense of their happily dual identities. Watching the Indian and the Indigenous dancers, singing the national anthems of both India and Australia, and saluting both national flags, brought a wonderful sense of pride in, and celebration of, the two cultures that together afford us a sense of home. Indian Consul Nandakumaran Konnat joined the Lord Mayor in leading the proceedings.

The celebrations by the Consulate General of India continued in a more formal gathering in the evening as the Consul General Manish Gupta hosted a reception for selected members of the Indian community at the salubrious Sofitel Wentworth hotel. In attendance also were members of other diplomatic corps in NSW, and many state politicians and business leaders.  Though the Governor of NSW Margaret Beazley was invited, she could not attend, leaving her Official Secretary Michael Miller, RFD and husband Dennis Wilson to join the festivities instead. With the women in their

resplendent saris and the men in their suits and national dress, it was a great way to finish the celebrations.

In a strange way, the amalgamation of the melas, the dinner, the flag hoisting, the public square festivities and the formal reception, all added to the sense of the occasion. 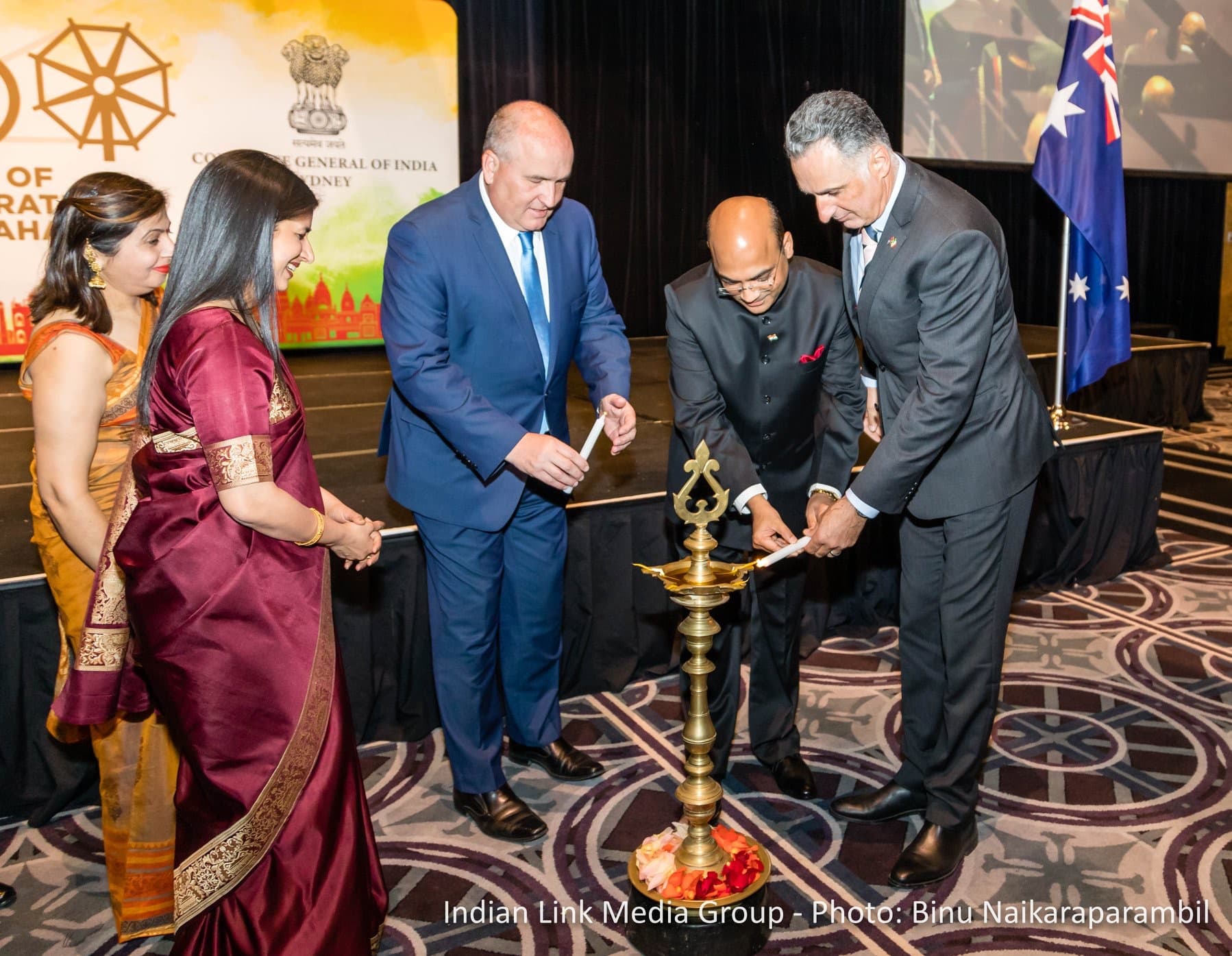 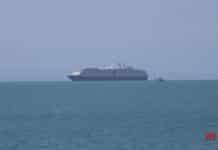 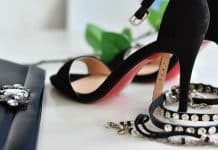 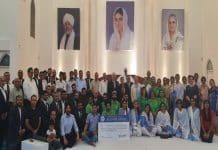 David Coleman: The regional migration concept is not new