Every week in Australia, one woman is killed by her partner or a person she is intimate with. This chilling statistic from the Australian Institute of Criminology throws light on how domestic violence can take many shapes and forms in our society. The grim reality is that there are very few studies on the subject of domestic violence in the sub-continental community in Australia.

Taking it upon herself, the inspiring Kittu Randhawa has decided to launch Australia’s first non-government organisation that will support and assist people from the Indian sub-continent who are faced with a domestic violence issue or any other crisis situation in their lives. The organisation aims to help people navigate and find their way with the right aid from the Australian system.

“Up to now, many Indian subcontinent community leaders have downplayed the issue of domestic violence within the community,” Randhawa told Indian Link. “This has made it harder for the service providers who are trying to assist the community members when there is a problem. Clearly you can’t manage an issue if it is claimed not to exist.”

Randhawa continued, “The more pressing need to start this NGO came about after Parminder Kaur from Rouse Hill, aged 32, died from third degree burns on 3 December 2013, shortly followed by Monika Chetty, aged 39, from Liverpool found in early January, 2014 with acid burns who later died on 1 February, 2014. The issue could no longer be dismissed as a myth.”

A procurement and engineering specialist by profession, 50-year-old Randhawa gathers strength from her personal struggles in Australia when she migrated from the UK in 1991. She had to start from scratch after a bitter divorce within one year of marriage.

“My early days in Australia were a daily struggle to survive,” Randhawa said. “I found myself abandoned by my husband and undergoing abuse from his family. In spite of being a permanent resident, a quick fit into Australian culture, no issues with a language barrier and being educated, I faced incredible hardship.”

Failing to have enough identification, Randhawa failed to get a tax file number or Medicare, was unable to open a back account, and had no address. She knew nobody in Australia and was unable to secure a job.

“For many weeks the only time I would have a meal was at the Gurdwara at the weekend. No different to the experiences of many student migrants in recent years,” Randhawa recalled. 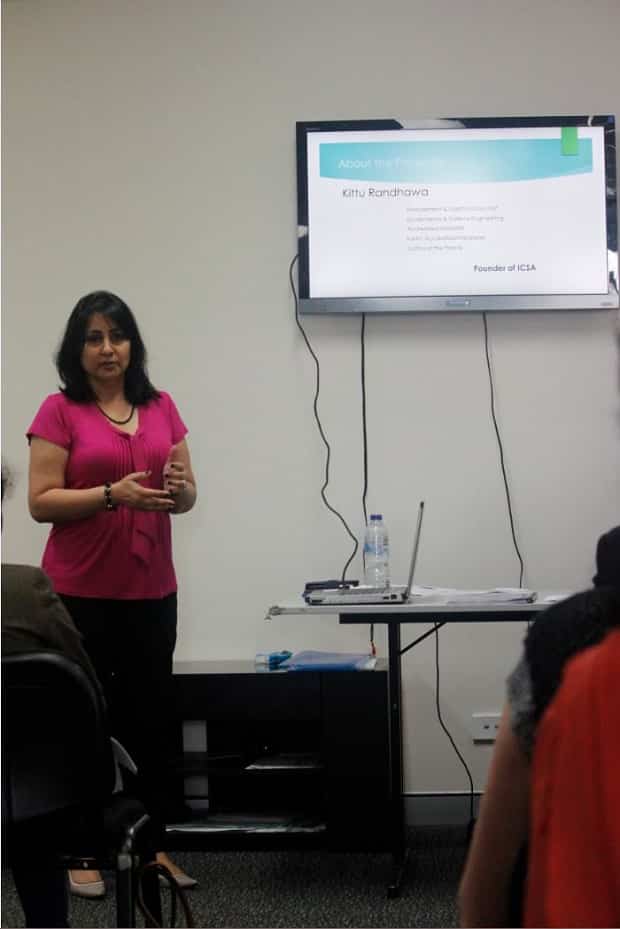 There were few support services around then, and even for those that were available, Randhawa found she was not eligible. “In spite of difficult start, I’ve made a good life but I don’t like the thought that more than 20 years later young people are arriving and still need to go through the struggles alone and without proper support services.”

The inception of this agency was triggered by the growing number of new migrants approaching people like Kittu Randhawa for help.

“Starting around three and a half years ago, I began approaching various associations to see if they would broaden out into this practical support space,” Randhawa said. “Most agreed it was needed, but had their own limitations or restrictions on the activities.”

Randhawa became acutely aware that a large portion of people needing assistance are temporary residents who are excluded from funded projects as they are deemed by their status to be self-sustainable.

This posed a problem in that services for this group would never be eligible for any funding from the government, and so they needed an organisation with a structure and business model that could raise its own revenue and determine its own services. This led to the establishment of the Indian (Subcontinent) Crisis and Support Agency as a social enterprise.

“We want to collaborate with people and agencies on how there can be greater inclusion of the community, especially for those who feel socially isolated. Whether it is through language barrier, cultural differences or their family circumstances, we want to encourage victims to speak up and report to authorities. We are partnering with the White Ribbon organisation and inviting other groups to join hands. We would like to share information and work together,” Randhawa reiterated.

At the recent launch of the domestic and family violence focus group, NSW Labor Leader John Robertson addressed the gathering, focusing on the need for culturally-specific organisations to combat domestic violence.

“We take great pride in being a multicultural nation, but with that comes many challenges,” Robertson said. “Those challenges are also about the fact that some will commit acts and say it is a cultural issue and therefore it is not something that should be brought up. I am a strong supporter of multiculturalism, but there are certain things that are completely unacceptable across the world.”

“I am fully committed to this cause and will support this organisation. It is important that funding should be made available for such specialist services,” Robertson, an ambassador for the White Ribbon Group, told the crowd.

Dealing with grief and loss