Eighty nine years after Mahatma Gandhi performed his Salt March in defiance against the oppressive regime of the British in India, a small school community in Sydney’s west got a good feel of the sacrifice and the fortitude involved in the endeavour.
Students, teachers, parents and special guests at the Darcy Road Public School in Wentworthville huffed and puffed as they followed a bunch of students round the school campus, imitating the Mahatma’s game-changing walk.
They were led by a group of Indian-origin students, all of them dressed as Gandhi – in white robes and Gandhi caps. The main Gandhi for the day, wore a bald head cap and the trademark glasses.

They said, “This salt is made by the Indian ocean and air and water. It’s our birth right to have our salt. Let’s march with non- violence for our freedom.”
They were re-enacting Gandhi’s famous breaking of the Salt Law laid down by the British, which required them to buy salt from the British at hefty prices rather than produce their own. The simple ceremony was not only a history lesson, but also a lesson to the kids that protest can be made by peaceful non-violent means.
It is an important message and one that will be reiterated many times the world over as the Indian diaspora marks the 150th birth anniversary of its best known citizen. 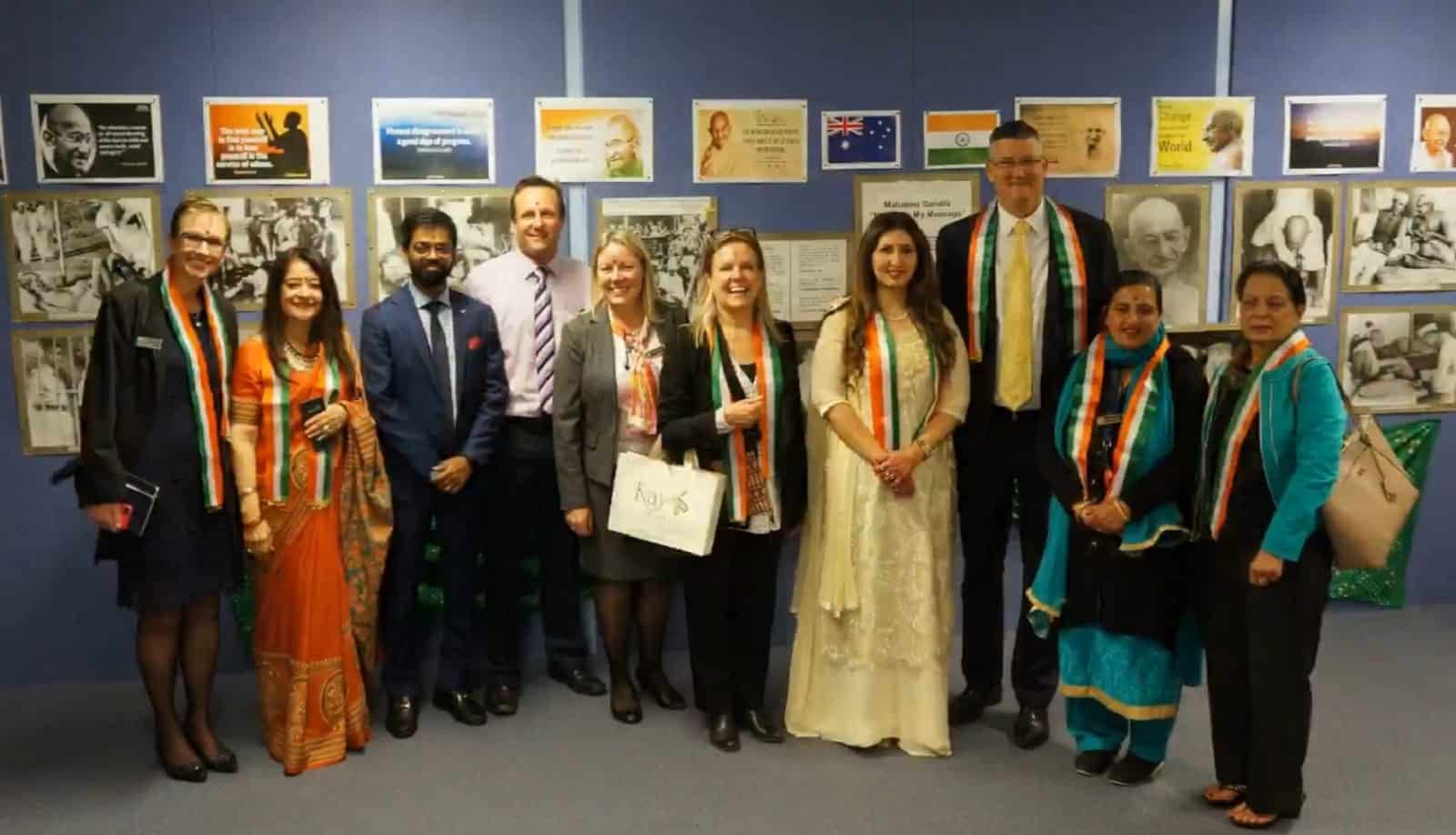 The event at Darcy Road Public School also featured a photographic exhibition of the life of Mahatma Gandhi, organised in association with Mala Mehta of the IABBV Hindi School.

Presented also, was poetry recitation in Hindi, by students under the care of teacher Ekta Chanana. Kindergarten student Shivaga impressed with her poem based on freedom. Senior student Devi’s poem, another highlight, was about the Tiranga (India’s tricolour flag): she swayed her hands expansively, mentioned Ahimsa (nonviolence) in her poem and finished with a loud proud “Jai Hind”. 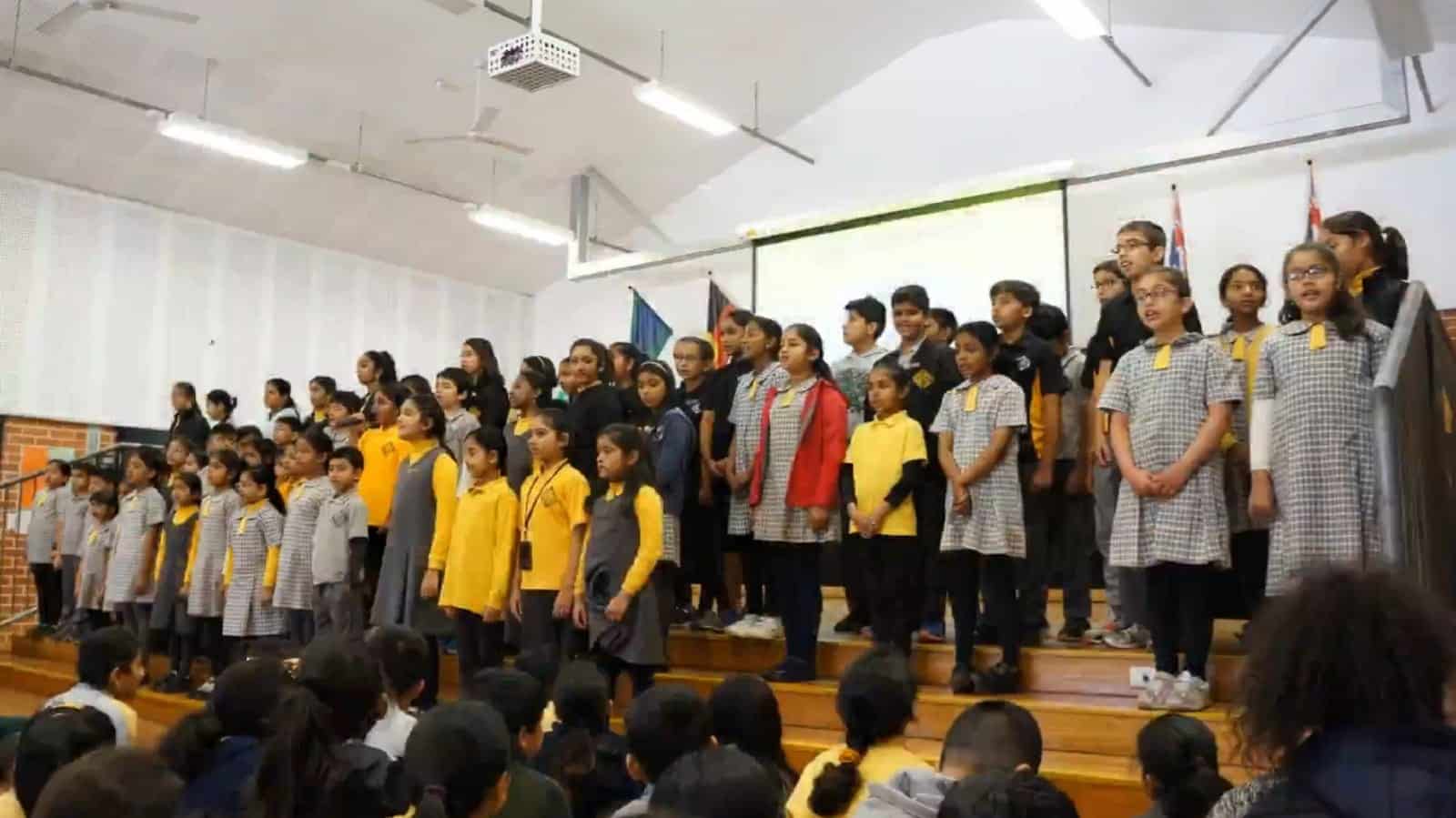 A roughly 40-strong choir comprised of students from Kindergarten to Year 6 sang the national song Vande Mataram with great gusto under the guidance of their teacher Kulwinder Kaur.
A group of about 12 students staged a projection of interview style quotes from Gandhi, with their teachers Ekta and Kulwinder. 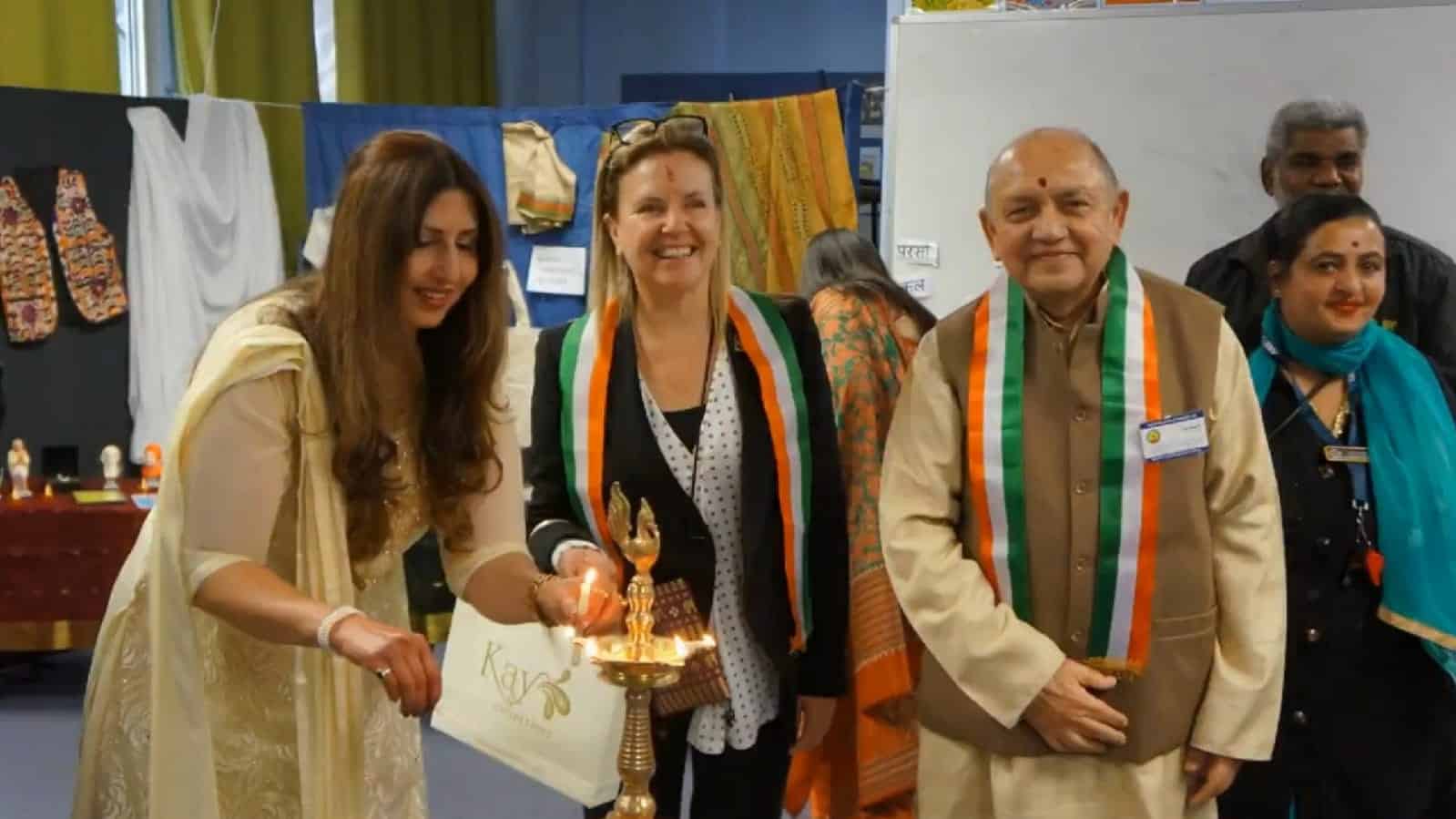 Principal Trudy Hopkins said in her address that she would like the school to channel Gandhi’s ideals, and to teach its students to respect others’ opinions. Hindi has been offered at Darcy Road Public School for two years now. Of the 27 nationalities present in the school, the majority of students are of Indian background.
Indian Consul Chandru Appar in his address observed to the students that they were polite and respectful, and were thus already following Gandhi’s ideals. He also urged the students to do their bit to protect the environment, by adopting behaviours such as reducing the use of plastic.

Mark Taylor MP was shown around the photographic exhibition, its salient points explained to him by the students. Mala Mehta in her speech spoke about the need to introduce
Hindi in more schools. Ekta Chanana told Indian Link later, “I think it was a wonderful
experience that introduced Gandhi to all our students. They have now learnt that he was a leading world figure of modern times, and that his ideals still hold a place in our lives today. I am very grateful to our Principal Trudy Hopkins and Deputy Principal Amanda Dippneaar for organising this, and to Mala Didi for her guidance and for the exhibition.” She added, “I am very proud of my students who presented on the occasion. We worked together on their poems and songs for a month, and they truly impressed with their level of involvement and keenness to learn.”
The photographic exhibition, entitled ‘Mahatma Gandhi: My life is My Message’ is produced by India’s National Gandhi Museum and the Government of India’s Ministry of External Affairs. It was presented to IABBV School by the former Consul General in Sydney Amit Dasgupta in 2009. As an exhibition on the move, it has been seen by students in nearly 20 schools now.

It’s all about cricket