As this weekend’s Federal Election approaches, the Morrison Liberal Government has promised an allocation of $2.5 million for an Indian cultural centre in South East Melbourne.

According to Alan Tudge MP, Minister for Cities, Urban Infrastructure and Population, if re-elected, the funds will be made available to establish the proposed Indian community centre, the first of its kind in Victoria.

The pitch to voters was made at an event held recently, at the Indian Museum in Foster Street, Dandenong. Indian community leaders and local media attended the event. 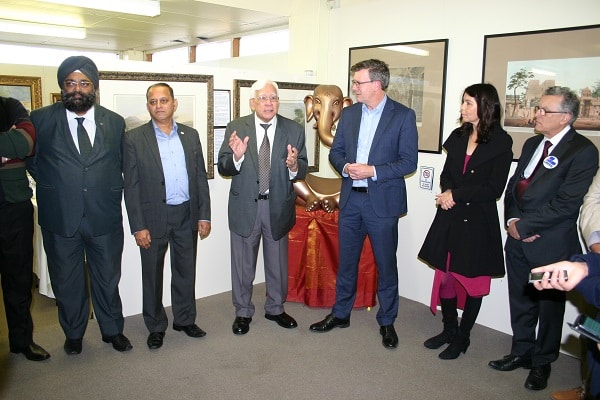 According to Alan Tudge, this brand new funding will be in addition to everything that is going on in Dandenong in relation to Indian Precincts.

“At this stage, the likely site has been identified in Bayswater where the proposed centre will be built for the Indian community,” he announced. Bayswater comes under the Minister’s electorate of Aston.

He congratulated the broader community and commended those who lobbied for the centre, particularly Vasan Srinivasan, Chair of the Australian Indian Community Charitable Trust and Param Jaswal, President of the Federation of Indian origin Multi-faith Organisation (FIMO).

The Minister acknowledged the duo for spearheading the well-developed plan and working persistently on getting it all together and acquiring the support from the community.

“The project will require a fair bit of money so we need to work out how to fulfill the project and whether it would be a dollar for dollar arrangement so the full estimated cost can be met,” said the Minister.

According to Vasan Srinivasan, the centre will provide a dedicated space for the community to hold events, conduct language classes, host cultural festivals and offer a multitude of services to a large section of Indian population in Melbourne.

“This community centre will also benefit the local community through new employment opportunities for local business establishments, existing or new, thereby creating a flow-on effect in increasing the economy of the local area substantially over the coming years,” said Vasan.

Jennifer Van Den Broek is the local candidate for Holt and lives in Cranbourne East. She endeared herself to the audience by addressing them in Hindi and introducing herself. Jennifer hails from Kanpur and migrated to Australia 21 years ago. She lives in Melbourne with her husband Gary and three sons.

“Having lived in Cranbourne for 21 years I have seen the multicultural side of things grow – we now have around 37.8% South Asian community living here. This excited me and so did the opportunity to have an Indian in Parliament,” she said explaining why she chose to stand for these elections.

According to another recent announcement, a Shorten Labor Government will match the commitment of $2.5 million to the South Asian community to build community facilities.

As per the release, funding for this commitment has been included in Labor’s Fair Go Budget Plan and will help build new facilities and modernise existing ones. Labor will consult further with the South Asian community to finalise the process.

There have been long-standing efforts to build an Indian community centre in Victoria including feasibility studies, draft reports, proposals, plans and grants in the past but we are yet to see anything concrete materialise.

Whichever major party takes away this election, we hope this pre-election commitment will reach fruition even if it seems to be too little, too late.

The Sydney-based not-for profit Sri Om Care, a culture-specific senior care provider, will receive a $5 million funding from the Labor government if it is brought into power on 18 May. The funding will expand the organisation’s existing services by enabling it to construct a respite centre for older migrants in Western Sydney.

A longer term fully residential senior care facility has been on the community’s wish list for a few years now, as our aging population increases and traditional support systems gradually become extinct.

A Labor release said the proposed centre will be “a relaxed and quiet respite location” in Clarence in NSW which will provide “overnight, weekend, weekly and fortnightly respite stays and include personalised services for the South Asian community.”

What does Cricket Australia’s $1.2bn deal with Foxtel & Seven mean?