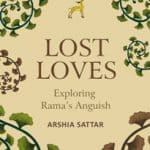 India’s two greatest epics, the Ramayana and the Mahabharata have struck such deep roots in the country’s moral and cultural consciousness that they infringe into every aspect of Indian culture.  For generations they were not only the favourite bedtime stories of Indian children, but they also captured the attention of great philosophers and theologians who have written extensive commentaries on them.  A few new translations of these timeless epics by two very talented women have brought these tales to a yet newer audience.  Arshia Sattar, a Sanskrit scholar, translated the Valmiki Ramayana into English to much critical acclaim a few years ago (1996).  This, and her abridged translations of the Sanskrit Kathasaritsagara had been published earlier by Penguin Books.  Her new book Lost Loves: Exploring Rama’s Anguish, is a series of essays on Rama’s love for Sita, also published by Penguin recently in 2011.

The other is a rendering of the Mahabharata by the very accomplished writer and novelist, Namita Gokhale.  Unlike the Ramayana, the Mahabharata is a more complex and multilayered epic, with narratives inside narratives inside narratives….. I have a few of the classic renditions on my bookshelf, by R K Narayan, C Rajagopalachari, CV Narasimhan, William Buck and many more. Gokhale’s Puffin Mahabharata has been written expressly for young people and is beautifully illustrated by the well-known artist and animator Suddhasattwa Basu.  His lusciously beautiful drawings are a visual treat for the young – as well as the not so young. 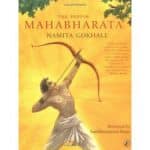 Gokhale has retold this great epic for young readers without reducing the complexities to a simple choice of black and white; she points out, for instance, that Bhima’s bullying of Duryodana and Dusshasana contributed, to some extent, to their animosity towards the Pandavas.  Neither does she ignore Yudhishthira’s weakness for gambling that precipitated a disastrous chain of events; nor does she skirt around unpleasant incidents such as the disrobing of Draupadi.  The heavier philosophical sections of the epic as such as the Bhagavad Gita and the Shanti Parva are explained in a lucid style.  Arjuna and Karna emerge as the heroes in this author’s version.

Gokhale discusses these – and several other moral dilemmas and ambiguities inherent in this epic, with disarming ease and simplicity.  She begins with the background, explaining the cycles of times and the various ways in which the epic has been told and retold, before delving into the story of King Shantanu and the river goddess Ganga, and the chain of events that lead to the great Kurukshetra war.  Every young reader must have a copy.

Arshia Sattar’s translation of Valmiki’s Ramayana first published in 1996, was an abridged version which successfully adapted this ancient classic and made it accessible to the present-day English reader. An added attraction was her superb introduction which provided new insights and background information for both the general reader and scholar alike.  In her translation, Sattar had taken care not to use the archaic language preferred by the Sanskrit scholars of the 19th century, but a very contemporary rendering which focuses on the narrative, rather than on the text.  For instance, the author points out how ‘gaja gamini’ (a phrase used to describe Sita) is better translated as ‘she walked liked the swaying gait of an elephant’ rather than the literal ‘she walked like an elephant’, for few people today can imagine and understand the graceful gait of an elephant.

There have been several other English translations of this epic including the abridged version by RK Narayan, the concise one by C Rajagopalachari, and more recently, the multi-volume version by Ashok Banker as well as the brilliant translation of the Tamil Kamba Ramayana by Sundaram – to name a few; but Sattar’s translation is informed by her great scholarly grasp of Sanskrit.  Her new Ramayana, Lost Loves is a little different and unusual for it attempts to explore the psychological mindset of Rama.  As a Sanskrit scholar and translator who studied Rama in all the different versions and renditions, she is singularly equipped to undertake this task. In this collection of essays, Arshia’s Rama is ridden with angst and torn between love and duty, divinity and humanity.  Wendy Doniger reminds us that this book makes us see how conflicted Rama really was, and therefore how he is such a good role model for us lowly mortals in the twenty-first century.

Sattar has a PhD in South Asian Languages and Civilisations from the University of Chicago. Her areas of interest are Indian epics, mythology and the story traditions of the subcontinent. Her articles appear in various national newspapers and magazines.  Her book reviews and articles have appeared regularly in various newspapers and journals.  She has also worked with documentary film and theatre, and taught Indian Studies at the Mahindra United World College of India in Pune for five years.  She currently works as a freelance writer and researcher

Finally, a tribute to GK Anantharam who was the brains behind the creation of the Amar Chitra Katha (ACK) illustrated and dramatised popular books on Indian epics, puranas, biographies and histories – which shaped and influenced a few generations of children’s reading in English in India.  Although the public equates the ACK phenomenon with Ananth Pai and his Mumbai creation in 1967, it was really GK Anantharam who produced the first version in Kannada – not English – in 1965, in Bangalore.  Moved by the idea that it was about time Indian children were exposed, in popular writings, to their own history and mythology, he began in a small office in the Bangalore office of the India Book House.  He was also influenced by the stirrings of Kannada literary renaissance at that time, and he wanted to see children reading more books in the local language.  After repeated nagging of his IBH boss GL Mirchandani, Anantharam was allowed to publish books in Kannada.  Finally, he managed to goad his boss to shell out Rs 10,000 for his new baby – which turned out, after some ups and downs, to be a popular comic series, named Amar Chitra Katha by Ananthram himself.  The rest is history.

From those who’ve come across the seas