Home Arts Dean Coelho is an accomplished jazz musician and he’s only 12 years...

Not many children are passionate about jazz or violins when they are 12 years old, but Dean Coelho, a Year 7 student of Eltham High School in Melbourne, is no ordinary fiddler.

Not only does he play the violin at orchestras, gigs and workshops, he is also a versatile musician and plays the piano and drums as well. 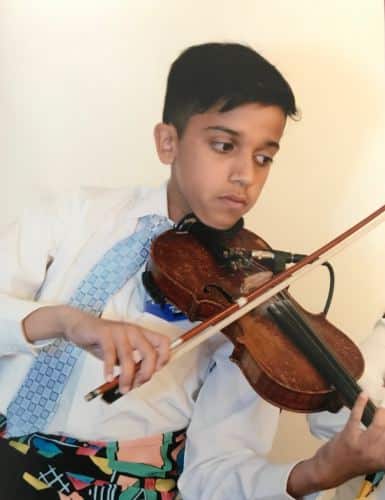 He plays first violin in the senior strings orchestra and plays the drums in his school bands.

He played at the 73rd Australian Jazz Convention in Ballarat last December, the Victorian Jazz Club’s 50th Anniversary event and at various small gigs around Melbourne.

Dean showed keen interest in playing the violin at the age of 4 and started lessons from Year 2 in primary school.

What draws him to the violin?

“I was attracted to the instrument when I heard family members play the violin when I was a toddler,” Dean revealed. “My uncle Daryl Coelho and cousin Gabriel De Figueiredo have been a source of inspiration to me.”

He added, “I have also been inspired by the great Stephane Grappelli and the Australian jazz violinist Julian Ferraretto.”

Dean practices, on average, for about an hour a day and among the numerous pieces that he plays with ease, has two favourites – Blue Bossa and The Bach Gavotte.

Has the young fiddler tried his skills with Goan music – the sound of his roots?

Of course, Dean replied with a smile.

“Ever since I watched the movie Nachom-ia Kumpasar, I began playing songs from Goa and have played at many Goan events organised by the Goan Overseas Association of Victoria in Melbourne.”

Watch a diamond crack under pressure