A toilet adventure of epic proportions changed his world. Now he wishes to share his story with everyone. With his latest book Toilet Warrior, Melbourne’ s Mark Balla talks about his investment in the ‘toilet economy’ that trades dollars for dignity and profit for purpose.

From Ted Talks to scripting books, Mark Balla’s inspirational journey is fueled and articulated with passion.

Defecation and sanitation are not topics on top of most people’s minds, but Mark compels you to think why they should be on your charity radar.

After helping over 30,000 kids to get better access to sanitation, Mark has made toilets his business – albeit one where the returns are more meaningful than monetary.

As a previous Lonely Planet Survival Guide, writer Mark knows how to put pen and thoughts to paper, and he covers plenty in the eleven chapters of his book.

His narrative, woven around the issue of toilet-less schools in Indian villages, is compelling and adds an immediacy to the issue rampant in rural India – an issue that we can’t imagine in our lives of western comfort.

From a chance encounter with two university students from Daharvi – Mumbai’s largest slum – to meeting Bollywood actress and sanitation ambassador Vidya Balan, Mark takes you deep inside his ‘toilet journey’.

He shares his laughter and a lot of tears as he narrates his multi-sensory experiences in India that captivated him so much that he sold his business and found another calling.

At times he deviates to other subjects like seat-belt safety and cleft lip surgery and other causes dear to him. But at its heart, this is the story of toilets, or the lack of them.

He despairs at the school children forced to defecate in the open and is devastated about girls not attending school during menstruation due to lack of proper facilities.

He rejoices when his efforts deliver results in the form of multiple toilets built with the support of locals, school staff and Rotary clubs.

He revisits the schools and people to ensure sustainability and proper use of the facilities and relentlessly pursues his dream of helping a million kids around the world.

You may be tempted to skim over some of the pages towards the second half, but overall it’s a well-intentioned, well-constructed book where the main demand the writer makes on us is to have empathy for the school children bereft of the most basic of facilities and the need to act on it for improved welfare, sanitation and hygiene.

The book cover grabs your attention with a mehndi adorned hand displaying the classic finger gesture for toilet and the book is illustrated with several black and white images of people, places and of course poop houses. The subject is squeamish but the content and intent is strong-stomached. 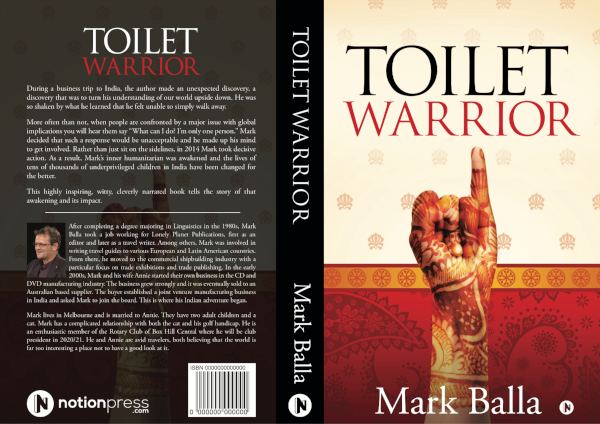 According to Mark, human suffering, especially suffering of children, should be unacceptable to all of us. It is only through passion and compassion that we can hope to make the world a better place for those in the greatest need. Part of the proceeds from the Toilet Warrior will directly contribute to projects that will change the lives of many.

A time of hope or fear?