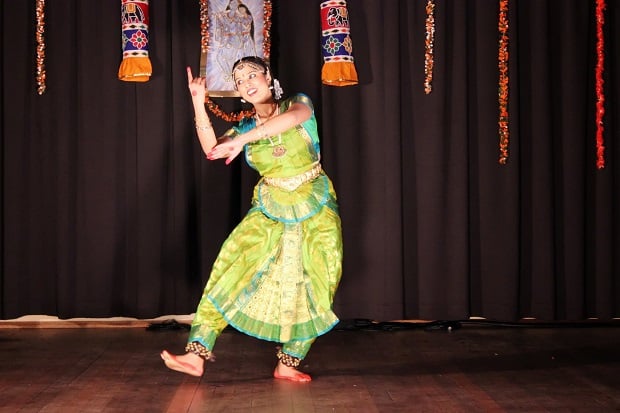 The Global Organisation for Divinity (GOD) Australia, staged an evening of dance and music recently at the Dundas community centre, in connection with the Krishna Janmashtami celebrations. The Master of Ceremony mentioned in her introduction, the many facets of Lord Krishna’s personality and thanked the artists for coming forward to perform at the event. She observed that to learn the art with devotion and to offer it back to the Lord is a great form of prayer in itself.

The initial part of the evening was an hour-long Bharathanatyam performance by Shruti Sharma. With great elegance and poise, Shruti brought out her phenomenal talent in this classical dance. Her swift and dexterous movements and fantastic facial expressions demonstrated perfectly that Bharathanatyam is indeed music in visual form. Shruti expressed the meaning of the songs through hand gestures and eye movements, and the rhythm with her feet. One could clearly get a whiff of the essence of natya shastra, “Yato hastha, thatho dhrushti, mana, bhava and rasa” in that sequence. What better way to transport the audience to a state of mental devotion for an entire hour! The songs chosen by Shruti for the dance were very meaningful, simple to follow and perfect examples of simplicity that is Bhakthi. Starting with Sri Muralidhara Swamiji’s composition Bhagyamae Bhagyam, it included Sri Ramachandra kripalu, Odi odi olivadhu, Ananda thandavam, Chaliye kunjanamo and the thillana. All these songs brought out in an artistic way, the efficacy of singing the divine names of the Lord. Shruti’s teacher Hamsa Venkat choreographed her dances and the rhythmic articulations bore the stamp of excellence for which Venkat is renowned.

The second part of the evening belonged entirely to Mrs Laksmi Abhishek and her group. Kranthi Kiran Mudigonda was on the violin, Sivakumar Sethupathy on mridangam and Hari Shankar on kanjira. For about 90 minutes, the artistes held the audience of 150-plus completely spellbound. With ‘Swagatham Krishna’, Lakshmi made a glorious start invoking a sense of surrendering our ego to the Lord, with her melodious voice. This was followed by Sri Muralidhara Swamiji’s kirtan, Manobalam yenakku arulvai which was sung with a great depth of emotion. As the concert progressed, it quickly became a great feast to the ears and minds rendered by such an excellent blend of sruti, swara, raga and tala. The melody of the violin and the rhythm of the mridangam and kanjira were of the highest order. The songs Varadharajan upasmahae, Kanna, kaatharul, Pachai ma meni, Baro Krishnaiah and the finale Vittala were not only great musical treats sung with such melody, but they conveyed very deep thoughts and glorified bhakti in a very emotional way.

The secretary of GOD Australia felicitated the artistes for their enthusiastic participation, and expressed his heartfelt appreciation for their excellent performances. In organising the event, GOD Australia desired it to be not merely a cultural event, but aimed to convey the point that bhakti, especially through singing the divine names is very relevant and important in modern times. The artists of the night brought out this point in such a simple, elegant and powerful way that the audience would never forget, ever!

A feast of classical music