Home Cinetalk Article 15 review: A must-see film, it’s what cinema is meant to...

In one word, Article 15 is spellbinding. It is everything that cinema was always meant to be. Thought-provoking, questioning, disturbing and ultimately cathartic because the cop-hero (played with a simmering intensity by Ayushmann Khurrana) succeeds in getting justice for the wronged.

In real life, however, things are different. And in giving the underdogs of the film a satisfying closure, director Anubhav Sinha (who has clearly turned a new leaf after Mulk) and his co-writer (Gaurav Solanki) remind us that happy endings are for the movies, and that we are getting one here because, hey, no matter how authentic, Article 15 is a film after all.

Before moving further, I must say it is hard to believe the level of political credibility and social conscientiousness Anubhav Sinha’s cinema has acquired after Mulk. Article 15 goes even further than Mulk in search of the truth that lies underneath the veneer of fairness and justice for all.

Sinha’s stunning film says a lot of things we don’t really want to hear about social discrimination in the cowbelt areas. The movie takes us to a dusty little town in Uttar Pradesh where a sophisticated liberal cop (Khurrana) joins duty and immediately stumbles onto a horrific caste crime whereby two girls are gang-raped and hung by a tree. A third girl has gone missing. Sinha imparts to the search for the girl a “thriller” element that in no way over-dramatizes the film’s incessantly grim mood. There are no songs even in the background because there is nothing to sing about. Not now. Not here.

In telling this hideously messy tale, Sinha makes no effort to spare us the details. The caste system and gender discrimination are so deeply embedded in the social fabric of rural India that men, or at least a section of them, feel entitled to teach women a lesson if they don’t comply.

In my favourite sequence of this exceptionally relevant drama, the cop-hero interrogates the main accused in the gang-rape. Listen to the casual almost blasé tone in which the criminal tells the cop Ayan Ranjan why the women they raped and killed so brutally had to be a taught a lesson. I heard the same unrepentant tone in the Netflix series Delhi Crime when one of the rapists tells the cop the girl had to be put in her place.

The sequence is chilling for the way the masculine mind works in a male-dominated society.

I would have liked to see Khurrana’s rage more overtly expressed in the scene above. But for reasons best known to this brave actor and his even more brave director, the performance invariably holds back, as he checks himself from losing his cool. It is the sign of a civilized bureaucrat’s struggle with his self to cling to his core of humanism and civility while all around him the world crumbles and collapses into a heap of brutal incivility.

The film has an exceptionally astute sense of pitch and tone. Though the background score is a wee bit flashy, Anubhav Sinha never over-punctuates his drama. He is not afraid to let the world he recreates glisten with the sweat of inhuman conduct. The actors are all so clued into the director’s “kingdom of the damned” that they blissfully slip into their roles with no apprehension of tripping over the abyss of self-conscious authenticity.

Besides Khurrana, who brings a feeling of bridled indignation to every scene, the film’s other hero is Ewan Mulligan’s cinematography. It doesn’t miss a single detail in the ravage and chaos of the heartland, so unpolished and yet so untouched. The sound design is impeccable, catching incidental noises in the small town like butterflies in a jar. 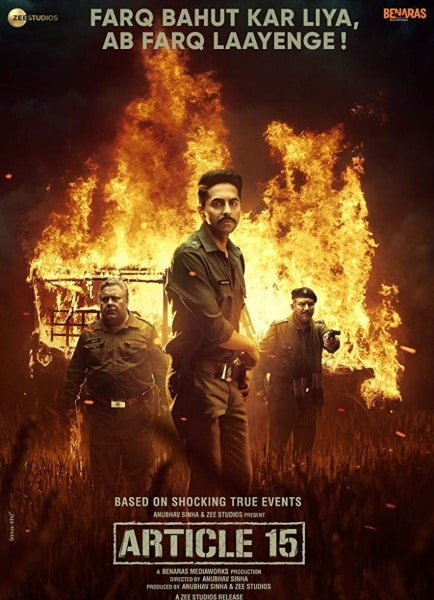 Article 15 is a film that must be seen by every Indian. Not because it tells us something new. But because what it tells us ought to be irrelevant to our society by now. But oppression, like the films on oppression, have a knack of coming back when we feel it is gone.

At one point, the hero confesses he needs to “unmess” the mess created by social discrimination. It is a mean savage world out there for women, and men of meager income. That Anubhav Sinha takes on the onus of splitting wide open the debate between the haves and have-nots is no small achievement. The director deserves a standing ovation for putting the cinema of social awakening back on screen without any self-congratulation.

‘Pati Patni Aur Woh’ review: It is a fun watch